Play now Play now
T&C's apply
18+ Only one First Time Deposit Bonus per player/computer. Minimum deposit to qualify: $25 ONLY, computers never used for Americas Cardroom Real Money Play. Bonus = 100% of First Deposit up to $1,000. Only first deposit during the promotion period eligible for First Time Deposit bonus. Paid out in increments of $1 for every 27.5 Award Points Earned. Points previously earned do not count towards the bonus req. Full Terms and Conditions. Please Gamble Responsibly

Americas Cardroom has brought the excitement of online poker back to the USA!

Americas Cardroom has grown rapidly over the past several years, bringing players back to the glory days of online poker in the U.S. through unique incentives and promotions. They are the only US facing site to offer $6 Million GTD Venom poker tournaments while hosting a weekly progressive rake race for both cash game and Sit & Go players.

As the flagship skin of the Winning Poker Network, Americas Cardroom has already grown into one of the top communities for U.S. poker players thanks to its no-nonsense deposits, quick payouts and high tournament guarantees.

– Rated fastest payouts in the industry
– 100% First Deposit Bonus up to $1,000 (200% if using a cryptocurrency)
– Up to $50 Free cash on first deposit via Spinning Cards
– U.S. players accepted
– $6 Million GTD Venom Tournaments
– Only site with weekly progressive rake races for Sit & Go’s and Cash Games
– Accepts 60+ Cryptos (including Bitcoin) for Deposits and Withdrawals

OSS Cub3d (Feb. 9th to Mar. 8th): The popular Online Super Series Cub3d returns for a 9th time. It is three consecutive tournament series (MOSS, OSS, BOSS) and will have $13 Million in guarantees over 220 events, including four $1 Million tourneys.

catch is that if you leave a winner, you can only return in the next 7 days to the No Rathole Tables by buying in with the same amount you left with.

60 Types of Cryptocurrency Accepted: ACR accepts Bitcoin and over 60 other types of cryptocurrencies for both deposits and withdrawals. Players can convert their preferred type of cryptocurrency into USD to be played on the site directly from the cashier. Alternatively, they can have their winnings sent to them in any cryptocurrency that ACR supports.

The Beast: This unique weekly rake race awards cash prizes and tourney tickets to cash game grinders. This is on top of ACR’s lucrative VIP program and costs nothing for the player as a portion of the rake is funneled to the cash leaderboard. The more hands a player plays, the higher they rank on the leaderboard and the more cash they make. To date, The Beast has awarded over $20 Million in cash and tournament entries. 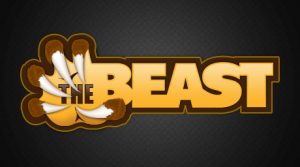 The Online Cage: This nosebleed cash game in time-based tournament format plays every Wednesday at 7pm ET. Players may buy-in directly or qualify via satellites for this 5-hour $1,050+$50 buy-in event. The blinds increase each hour and whatever chips the player has at the end is converted to cold hard cash!

Spin to Get IN: Starting at one cent! This is part satellite, part slot machine and is an easy way to gain entry into Americas Cardroom’s tournaments and Sit & Go’s. You can spin for 1 cent, 25 cents, or $1 and if you hit three-of-a-kind, you’ve won your seat.

Americas Cardroom’s software is bigger, stronger, and faster than ever before thanks to a major update in May 2019. The update (details below) was focused on the user experience from under-the-hood improvements to a whole new design. It will also allow for much quicker product updates in the future. 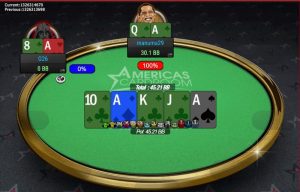 First Deposit Bonus: Players get a 100% First Deposit Bonus up to $1,000 (200% if they use a cryptocurrency). The Welcome Package also includes 20 Days of Free Cash up to $50 via Spinning Cards. Bonus details: The First Time Deposit Bonus is paid out in increments of $1 for every 27.5 in Award Points Earned. Award points previously earned do not count towards the bonus requirement. Players have 60 days to play the First Deposit Bonus through.

Rakeback Players: 27% Rakeback. The Rakeback reporting tool is located in the “Rewards” tab within the Poker Lobby. The Rakeback percentage is based on the net rake generated from Monday to Sunday.

Earning Points: When players play in a cash game with a qualified rake or in a tournament where a fee is paid, they will earn Rank Points (RPs) which determines their rank.

Players will also earn Combat Points (CPs) alongside the Rank Points. The number of Combat Points earned each month depends on the rank. A special Player Point multiplier is set for each military rank, the more a person plays – the more they win!

Combat Points are spendable currency at the ACR store. Combat points can be used to purchase cash bonuses, electronics, clothing and even a car!

Note: Rakeback players cannot participate in the Elite Benefits program, but are allowed a one-time switch.

Additional details: Multi-tabling: 24 Tables at a time and compatible with HEM and PT4.

· Bitcoin or 60+ other Cryptocurrencies · Instadebit

Play now Play now
T&C's apply
18+ Only one First Time Deposit Bonus per player/computer. Minimum deposit to qualify: $25 ONLY, computers never used for Americas Cardroom Real Money Play. Bonus = 100% of First Deposit up to $1,000. Only first deposit during the promotion period eligible for First Time Deposit bonus. Paid out in increments of $1 for every 27.5 Award Points Earned. Points previously earned do not count towards the bonus req. Full Terms and Conditions. Please Gamble Responsibly